The world of wine is wide enough, but in Italy it may be never-ending. With an immensely diverse history leading to a kaleidoscope of rewarding wines for the adventurous consumer, Italy is both the wild west of wine, and the time-honoured spiritual home of the vine. The range of wine within Italy is its most alluring aspect, from some of the noblest wines in the world like Barolo, Amarone, and Brunello, to rustic regional specialties like Aglianico, Verdicchio, and Etna Rosso that cannot be beaten as a pairing with local foods, Italy has it all.

Throughout this guide an attempt will be made to give an accessible look into an immensely complex subject. Italian wine regulations seem to more than justify the stereotype of a chaotic and intractable Italian bureaucracy, and neither consistency nor predictability should be expected. When possible, information about well respected producers available in export markets will be provided, as well as the best recent information for favourable vintages. Given so much of Italy's wine has evolved with local cuisine, traditional food pairings will be mentioned when appropriate.

The secret of Italian wine is not so different from the wines of France. The ancient culinary traditions of the country are intrinsically linked to its wine traditions and over the centuries viticulture and gastronomy have evolved together. While some noble wines have grown in renown far beyond their humble origins, others cannot be separated from their culinary companies, like Lambrusco and Prosciutto di Parma, or Verdicchio and the fritto misto of the Adriatic Coast. What makes Italy different from most other wine-growing regions is its extensive latitude. From the highest point in the Alps down to islands off the coast of North Africa, Italy has a tremendous range of climates to grow wine, and a great deal of the land is coastal, which offers even more opportunity for quality viticulture.

There is a common narrative in Italy that makes it such an exciting region. Unlike France, much of Italian wine has come into the modern era only the past 70 years. World War II decimated the countryside and the subsequent industrialization of the Peninsula led to massive changes in the wine industry, including the rise of large scale cooperatives and the bulk wine industry. Fortunately, led by quality oriented producers, Italy has emerged to offer some of the finest wines in the world, and many formerly destitute regions are on the up and up. More important, in the 21st century, is the fascination with wines of authenticity and regional character. In the 1960s winemakers all tried to make their product taste like French wine. Small oak Barriques and other techniques tended to wipe out regional character. Since the 1980's the pendulum has swung back, and consumers are more interested than ever in the next big thing. This drive has unveiled remarkable wines that were heretofore obscure, like Montepulciano d'Abruzzo and Nero d'Avola, have seen a meteoric rise in popularity world wide.

While obscure regions are now seeing their day, previously known but unappreciated wines have seen a revision in reputation over the past two decades. Soave, Chianti, and Pinot Grigio all emerged at first as immensely popular wines thanks to their easy drinking qualities and low price at the cost of their reputation. Today, all three wines have increased in quality tremendously and have never been better. The increasing importance of chef driven restaurants internationally has also reoriented the world towards wines that pair well with food, which is indubitably Italy's greatest strength. 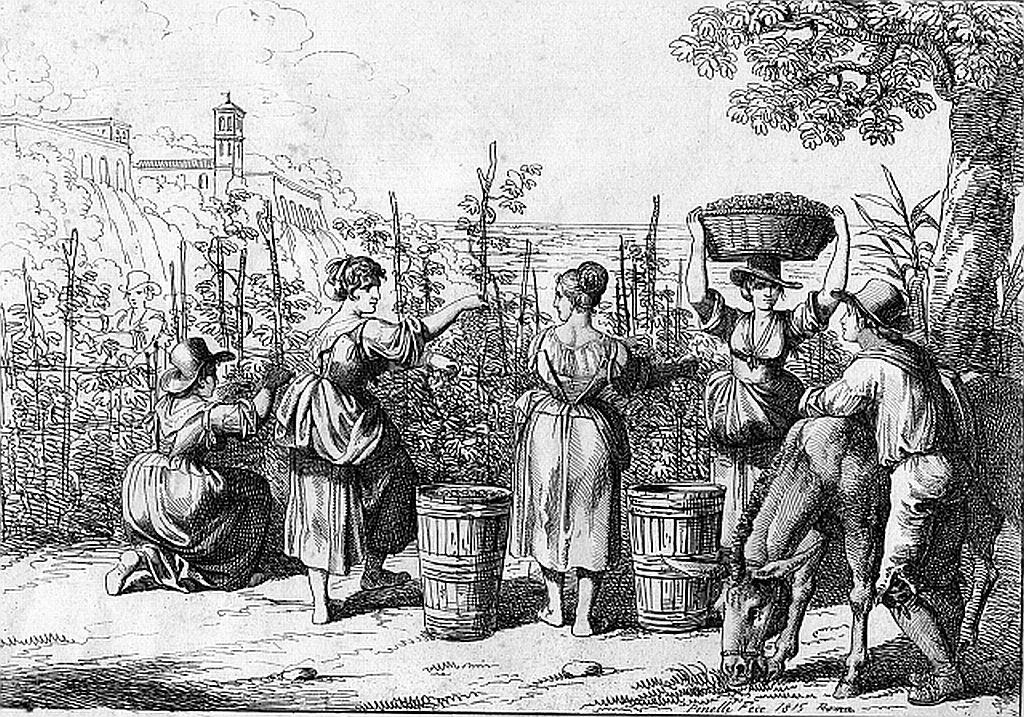 Italy has a diverse a rich viticulturist history far more complex than any other in Europe. The Etruscan civilization in Northern Italy emerged as an Iron Age culture that grew rich off trade with Northern Europeans and were grew grapes for wine making. The Etruscans cultivated grape vines for centuries before the rise of Rome and much of their work was adopted by the conquering Romans. In Southern Italy Greek colonists likely brought many distinctive grape vine varieties that are still seen today as well as their own traditions of viticulture. The Phoenicians of Northern Africa were also accomplished grape growers who first brought wine makng to Spain and other coastal regions. The combined influences of ancient cultures merged during the rise of the Roman Empire who then spread viticulture throughout the Mediterranean world bringing cultivation of grape vines to France and southern Germany, as well as parts of Spain not already accustomed to the practice. At this time, wine was a commodity and an important part of daily life and culture. Water may have been completely unpalatable and mixing water and wine together was an essential ritual.

After the fall of the Roman Empire in the 5th century, wine making continued to be an important part of most cultures in Western Europe. Monasteries in France helped refine and perpetuate the making of wine through the Middle Ages while mercantile city-states in Italy traded local wines throughout the Mediterranean. The Phylloxera that was the scourge of Europe devastated Italian vines as well causing a major disruption in Italy where disruptions were already common. Outside of the highest alpine vineyards, grape vines needed to be replanted, now grafted on American rootstock.

Constant war was an accepted part of life in Italy for centuries until unification in the 19th century. After two World Wars Italy industrialized rapidly and modern wine making techniques put the focus on quantity over quality. As the modern international wine industry has developed Italian winemakers have more and more opportunities for success with an international demand for high quality, authentic regional wines. We are only beginning to touch on the modern exploitation of Italy's immense viticultural potential as wines heretofore confined to the local dinner table are finding an audience world wide. Today, Italy vies with France for the top producer of wine every year, worldwide.

As in France and Spain, Italy uses an appellation system based on the ‘denomination of origin’ that is designed to protect regional wines and their historical methods of production. The highest is DOCG, or Denominazione di Origine Controllata e Garantita, which guarantees the wine will come from a very limited geographical area, from a select number of allowed grapes, and made in a generally consistent style. Depending on the wine, the DOCG status will require a certain period of aging and minimum alcohol. The second tier, is the looser DOC, or Denominazione di Origine Controllata. DOC wines have many of the same types of restrictions as DOCG, but a bit laxer in their requirements. For instance, Rosso di Montalcino is a DOC wine made from Sangiovese Grosso in the commune of Montalcino, while Brunello di Montalcino is a DOCG wine, made from the same grapes in the same region but with higher standards of quality and must be aged longer.

The final denomination for wine in Italy is IGT, or Indicazione Geografica Tipica. IGT only requires a wine to be from a specifically labeled geographic region (IGT Toscana for example) but does not mandate which grapes must be used, or how it can be made. IGT does not necessarily imply lower quality than DOC/G however. Prior to the introduction of IGT in 1992, many of Tuscany’s most adventurous, and now world renown producers such as Sassicaia, did not follow the DOC/G rules and thusly their wines were labeled Vino da Tavola, or Table Wine. The increasing prominence of what came to be known as Super-Tuscans led to IGT being introduced. Producers such as Gaja and Sassicaia relied more on their own personal brand and creativity with great success. These days, premium winemakers who do not follow the DOC/G rules, prefer to label their wine IGT, which guarantees that it is from the region it claims but allows them freedom to make it how they choose.

"These regulations are designed to protect the integrity of traditional wines, like Brunello, Barolo, or Amarone."

What is most important about these regulations, is that they are designed to protect the integrity of traditional wines, like Brunello, Barolo, or Amarone. They are not the last word on absolute quality however, and many of Italy’s finest wines, like Gaja, Sassicaia, and Galardi, are labeled as IGT.

Read along with us on this 20-part blog series on the wines of Italy.