Right in the heart of Italy, Tuscany is in many ways the signature region of the peninsula. The serene and picturesque countryside is well known in popular culture, and its wines are some of the most famous and most widely exported. The two towns of Florence and Siena offer a rich cultural backdrop for a wine history older than that of France. As early as the 13th century there are records of a trade guild for wine merchants.

While Tuscany does not produce the most wine in Italy, it produces the third largest volume of quality wine labeled as DOC. Two particular regions for wine in Tuscany are both famous for the same grape, Sangiovese. Red wine from Chianti was known for over a century as a rustic, but cheap table wine. That part has changed dramatically in the past 30 years. While Florentine merchants successfully branded Chianti with its cheap bulbous bottle and straw fiasco covering, the quality suffered as the original Chianti DOC required a surprising percentage of white grapes to thin out the wine. Today more attention and skill is being applied with stricter regulation and more ambitious producers – and those who once eschewed the DOC are now embracing it again. As a result, Chianti offers some of the most exceptional value for quality in Italy. Chianti is both a DOC and a DOCG wine that overlaps with the newer Chianti Classico DOCG that comes from the traditional smaller region that was first recognized three hundred years ago. The highest quality Chianti comes from the Classico area. Chianti Classico must be 80% Sangiovese but can be 100% (this was not always true!). Other permitted grapes are local red varietals like Canaiolo, and Colorino as well as Cabernet and Merlot. This variety of allowed blending components does afford a fair amount of variety. In recent years the regulatory body has instituted a new denomination, Gran Selezione, which requires the Chianti to be a single estate wine aged for 30 months.

In stark opposition is the Montalcino appellation. The Sangiovese Grosso clone known as Brunello was discovered only in the 19th century. Brunello di Montalcino has risen over the years to be second only to Barolo in international renown, indeed Italy vigorously investigates and prosecutes those who fraudulently blend other grapes as it can only be 100% Sangiovese Grosso from the Montalcino commune.

While several producers in the 1880s were producing a Brunello, by WWII, Biondi Santi was the only producer. At this point people began to realize how extraordinary their older bottles were, at least the ones that had survived the war. By the 1980s Brunello had grown to include dozens of producers and was declared a DOCG wine, the very first in Italy! Brunello must be aged for a minimum of 4 years (two is cask) for normale and 5 years for Riserva. Rosso di Montalcino has shorter aging times, but still must be 100% Sangiovese. The extraordinary price of some Brunello, as well as the strict regulations have led to occasional fraud with producers being caught blending other grapes to darken the garnet hued colour of pure Sangiovese. Biondi Santi remains a top producer in Montalcino, along with other stalwarts like Poggio di Sotto, Casanova di Neri, Cerbaiona, and Valdicava. Larger producers have aggressively lobbied to expand allowable vineyard area in the southern lowlands where higher yields but lower quality rule. Several larger producers do make decent Brunello but at a cost. Indeed as in Barolo, the 1980s was the beginning of a brutal culture war between the old and new schools of winemaking, with softer tannins, darker fruit, and oak notes dominating the modernist approach while traditionalists argued this muddled the soul of Brunello. While today the ebb and flow of styles has subsided there is still a range of styles. The overall style however now leans traditional but modern methods are acceptable and quality has never been higher.

The term Super-Tuscan was coined by international journalists decades ago, and it has stuck, though in recent decades the DOC/G system has opened up to allow more experimentation alongside higher quality. Super Tuscans are a fluid and evolving category of typically premium wine produced outside of the DOC/G regulations. In the past this meant accepting the Vin da Tavola designation though today the more considered IGT status is used. Further complicating matters is the accepted flagship Super Tuscan was a Bordeaux blend known as Sassicaia. Sassicaia was so famous from the 1960s onward that it now has its own Sassicaia DOC. Other wines that were once Super Tuscans may have returned to the Chianti Classico DOCG, since it now allows 100% Sangiovese, whereas others have remained IGT out of pride.

In Bolgheri, along the western coast of Italy, Bordeaux blends reign supreme. The Sassicaia estate is here, along with Ornellaia, Antinori Guado al Tasso, Masseto and Gaja Ca’Marcanda. The Bolgheri Superiore DOC allows a range of French varieties, typically Cabernet Sauvignon, Merlot, and Cabernet Franc, though Syrah, Merlot, and Petite Verdot are not unheard of now. The exact grapes do not have to be mentioned on the bottle, preferring to emphasize the terroir of Bolgheri rathern than the assemblage.

Outside of Bolgheri, in Chianti the Antinori family continues to produce IGT wines outside of the DOC/G system to great acclaim. Tignanello is a Sangiovese, Cabernet/Merlot blend and Solaia is a traditional left-bank Bordeaux wine. Both are considered Tuscan classics and remain IGT Toscana wines. While Chianti producer Fontodi makes a range of highly regarded Chianti Classico, they also continue to make their 100% Sangiovese Flaccianello as an IGT wine

The apex of Italian sweet wine is also from Tuscany, Vin Santo. This ‘holy wine’ was inspired by the holy wines of Santorini in Greece. Typically made from white grapes like Malvasia and Trebbiano, the grapes are dried on mats and then fermented and aged in wooden barrels that are never topped off. This results in a gorgeous combination of dried fruit flavours and caramel like notes from the slight oxidation. Vin Santo style wines are made throughout Italy in the very same manner and often with the same grapes, but the heart and soul of Vin Santo is Tuscan. 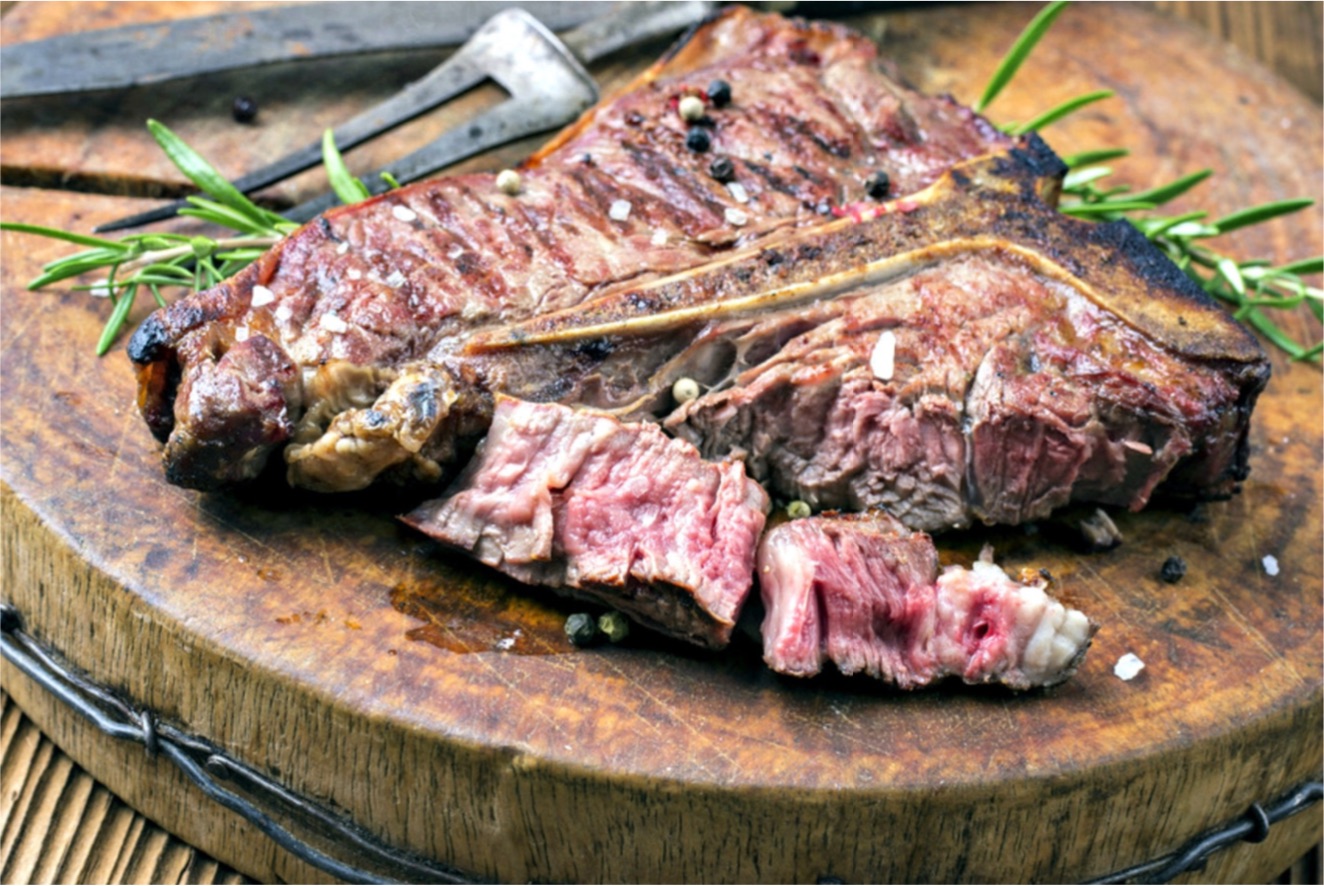 The classic Tuscan dish is the Bistecca alla Fiorentina, a large Porterhouse style cut from the Chianina cow, seared quickly and seasoned lightly. Sangiovese based wines from Chianti to Brunello are superb with simple grilled meats, or more complex stews like the Peposo dell'Impruneta, a slow cooked beef dish made with Chianti and whole peppercorn. Vin Santo is traditionally served with cantucci, a hard almond cookie similar to biscotti that you dip in the wine as a simple dessert.